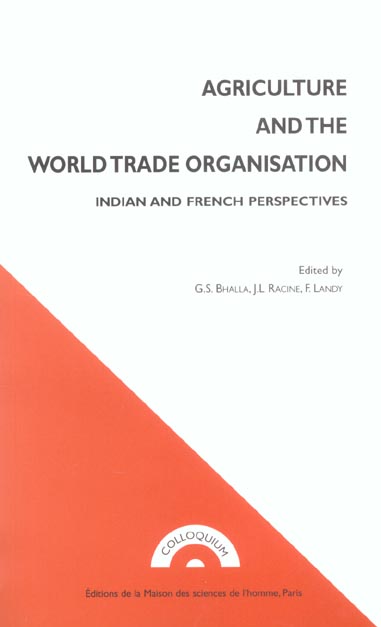 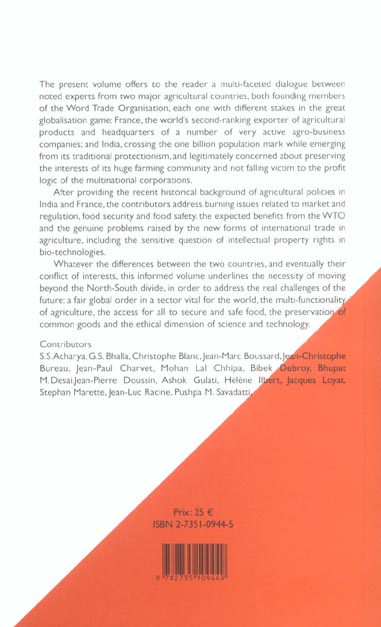 agriculture and the world trade organisation

The present volume offers to the reader a multi-faceted dialogue between noted experts from two major agricultural countries, both founding members of the Word Trade Organisation, each one with different stakes in the great globalisation game: France, the world's second-ranking exporter of agricultural products and headquarters of a number of very active agro-business companies; and India, crossing the one billion population mark while emerging from its traditional protectionism, and legitimately concerned about preserving the interests of its huge farming community and not falling victim to the profit logic of the multinational corporations.
After providing the recent historical background of agricultural policies in India and France, the contributors address burning issues related to market and regulation, food security and food safety, the expected benefits from the WTO and the genuine problems raised by the new forms of international trade in agriculture, including the sensitive question of intellectual property rights in bio-technologies.
Whatever the differences between the two countries, and eventually their conflict of interests, this informed volume underlines the necessity of moving beyond the North-South divide, in order to address the real challenges of the future: a fair global order in a sector vital for the world, the multi-functional of agriculture, the access for all to secure and safe food, the preservation of common goods and the ethical dimension of science and technology.