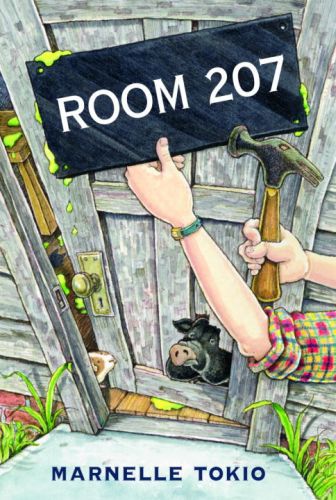 The kids of Room 207 arrive at their class on the first day of school to find it has suffered "a most grievous accident" and is covered in mysterious slime. Their teacher leads her charges to the original one-room schoolhouse that stands on the property. But the schoolroom isn't empty -- it is inhabited by a spooky guest. The shock of being transferred to the worst classroom on the planet has barely worn off when Erik, the school's biggest bully, and Stove, the world's second fastest pot-bellied pig, are added to the attendance sheet.
The winner of this year's Best Classroom contest will represent the school on a reality show, but what chance does Room 207 have to win when it is already nicknamed, "The Pigpen"? And how do you accept an award if your teacher has been swallowed by slime?
Room 207's cast of hilarious characters includes a guinea pig named Butterbum, a cat who needed ten lives and nine kids desperate to prove themselves to the school and to the reality-tv viewing world.
From the Trade Paperback edition.