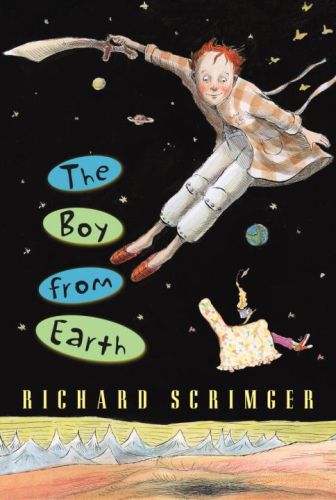 The Boy from Earth

Norbert, the tiny wisecracking alien from Jupiter, gets an emergency phone call from home. His sweetheart, Nerissa, has been kidnapped by an evil giant and placed in the Lost Tower of Lotubmen. He must find and rescue her, but he can't do it alone. Norbert has helped Alan through three earthly adventures. Now the tables are turned, and Norbert needs Alan's help. So Alan, the boy from Earth, comes to Jupiter and finds himself in a strange - and yet in some ways strangely familiar - environment.
Richard Scrimger's The Nose from Jupiter, A Nose for Adventure, and Noses are Red have won avid fans from Illinois to Italy. Alan is truly an everyboy. He is terrible at sports, is living through his parents' divorce, and has to contend with bullies and even villains. But he has a secret weapon. Norbert, an alien from Jupiter, has come to Earth and established a home-from-home inside Alan's nose. It's from there that the wise-cracking, brave, and irresistible Norbert changes Alan's life.
From the Trade Paperback edition.