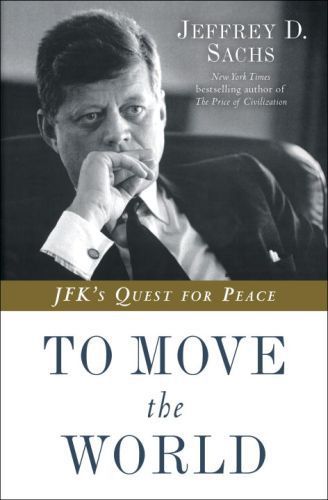 To Move The World

The inspiring story of JFK, the Cold War, and the power of oratory to change the course of history. John F. Kennedy's last great campaign was not the battle for re-election that he did not live to wage, but the struggle for a sustainable peace with the Soviet Union. To Move the World recalls the extraordinary days from October 1962 to September 1963, when JFK marshaled the power of oratory and his astonishing political skills towards that end. Jeffrey Sachs shows how Kennedy emerged from the Cuban Missile Crisis with the determination and capabilities to forge a new direction for the world. Together, he and the Soviet leader Nikita Khrushchev, both deeply affected by this near-death experience, would pull the world away from the nuclear precipice and chart a path for future peacemakers. During his final year in office Kennedy gave a series of speeches in which he sought to argue, against widespread pessimism, that peace with the Soviets was possible. He used his great gifts of persuasion on multiple fronts - with fractious allies, hawkish Republican congressmen, and dubious members of his own administration - to persuade America, the Soviet Union, and the world that cooperation between the superpowers was both realistic and necessary. To Move the World gives us a startlingly fresh perspective on Kennedy's presidency and an inspiring model for strong leadership and problem solving in our time.