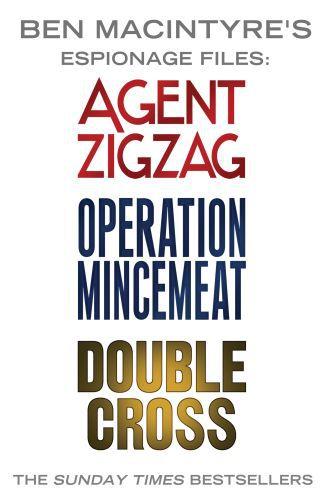 One December night in 1942, a Nazi parachutist landed in a Cambridgeshire field. His mission: to sabotage the British war effort. His name was Eddie Chapman, but he would shortly become MI5's Agent Zigzag. Dashing and louche, courageous and unpredictable, inside the traitor was a hero, inside the villain, a man of conscience: the problem for Chapman, his many lovers and his spymasters, was knowing where one ended and the other began. Ben Macintyre weaves together diaries, letters, photographs, memories and top-secret MI5 files to create the exhilarating account of Britain's most sensational double agent.
Operation Mincemeat:

One overcast April morning in 1943, a fisherman notices a corpse floating in the sea off the coast of Spain. When the body is brought ashore, he is identified as a British soldier, Major William Martin of the Royal Marines. A leather attaché case, secured to his belt, reveals an intelligence goldmine: top-secret documents Allied invasion plans.
But Major William Martin never existed. The body is that of a dead Welsh tramp and every single document is fake. Operation Mincemeat is the incredible true story of the most extraordinary deception ever planned by Churchill's spies - an outrageous lie that travelled from a Whitehall basement, all the way to Hitler's desk.
Double Cross:
D-Day, 6 June 1944, the turning point of the Second World War, was a victoy of arms. But it was also a triumph for a different kind of operation: one of deceit...
At the heart of the deception was the 'Double Cross System', a team of double agents whose bravery, treachery, greed and inspiration succeeded in convincing the Nazis that Calais and Norway, not Normandy, were the targets of the 150,000-strong Allied invasion force. These were not conventional warriors, but their masterpiece of deceit saved thousands of lives. Their codenames were Bronx, Brutus, Treasure, Tricycle and Garbo. This is their story.