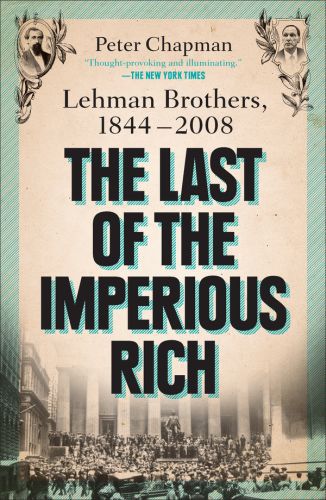 The Last of the Imperious Rich

"Chapman weaves a fascinating story framed in the history of the times during which Lehman Brothers helped shape financial markets."
-Booklist
In 1844 Henry Lehman arrived in the United States from Germany and, with his brother Emanuel, established a modest cotton brokering firm that would come to be called Lehman Brothers. In 2008 Dick Fuld, the last CEO of Lehman Brothers, filed for corporate bankruptcy amid one of the worst financial crises in American history. After 164 years one of the largest and most respected investment banks in the world was gone, leaving everyone wondering, "How could this have happened?"
Peter Chapman answers this question by examining the history of Lehman from its humble beginnings to its dramatic exit. He offers a sweeping narrative as well as a clear perspective on exactly what caused Lehman to fail. He also paints an intimate portrait of the people who ran it, including Bobbie Lehman, who in the 1920s led the company into the world of radio, motion pictures, and air travel. Chapman shows that, despite its inglorious end, Lehman not only helped shape the face of American finance, but also American life.