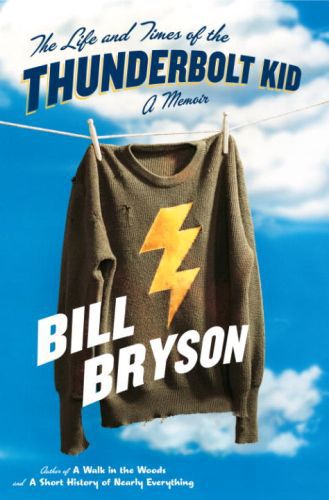 The Life and Times of the Thunderbolt Kid

From one of the most beloved and bestselling authors in the English language, a vivid, nostalgic and utterly hilarious memoir of growing up in the middle of the United States in the middle of the last century. A book that delivers on the promise that it is “laughoutloud funny.”
Some say that the first hints that Bill Bryson was not of Planet Earth came from his discovery, at the age of six, of a woollen jersey of rare fineness. Across the mothholed chest was a golden thunderbolt. It may have looked like an old college football sweater, but young Bryson knew better. It was obviously the Sacred Jersey of Zap, and proved that he had been placed with this innocuous family in the middle of America to fly, become invisible, shoot guns out of people’s hands from a distance, and wear his underpants over his jeans in the manner of Superman.
Bill Bryson’s first travel book opened with the immortal line, “I come from Des Moines. Somebody had to.” In this hilarious new memoir, he travels back to explore the kid he once was and the weird and wonderful world of 1950s America. He modestly claims that this is a book about not very much: about being small and getting much larger slowly. But for the rest of us, it is a laughoutloud book that will speak volumes – especially to anyone who has ever been young.
From the Hardcover edition.