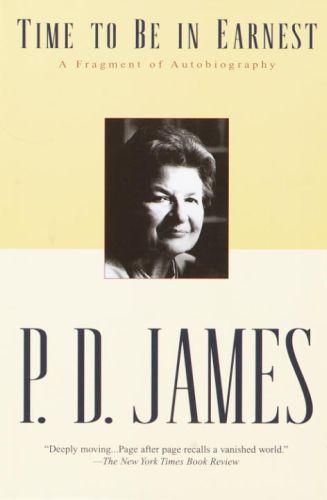 Time to Be in Earnest

In 1997, P. D. James, the much loved and internationally acclaimed author of mysteries, turned seventy-seven. Taking to heart Dr. Johnson's advice that at seventy-seven it is "time to be in earnest," she decided to undertake a book unlike any she had written before: a personal memoir in the form of a diary. This enchanting and highly original volume is the result. Structured as the diary of a single year, it roams back and forth through time, illuminating James's extraordinary, sometimes painful and sometimes joyful life.
Here, interwoven with reflections on her writing career and the craft of crime novels, are vivid accounts of episodes in her own past -- of school days in 1920s and 1930s Cambridge . . . of the war and the tragedy of her husband's madness . . . of her determined struggle to support a family alone. She tells about the birth of her second daughter in the midst of a German buzz-bomb attack; about becoming a civil servant (and laying the groundwork for her writing career by working in the criminal justice system); about her years of public service on such bodies as the Arts Council and the BBC's Board of Governors, culminating in entry to the House of Lords. Along the way, with warmth and authority, she offers views on everything from author tours to the problems of television adaptations, from book reviewing to her obsession with Jane Austen.
Written with exceptional grace, this "fragment of autobiography" has already been received with enthusiasm by British reviewers and readers. The thousands of Americans who have enjoyed P. D. James's novels will be equally charmed. Diary or memoir or both, Time to Be in Earnest is a delight.
From the Hardcover edition.