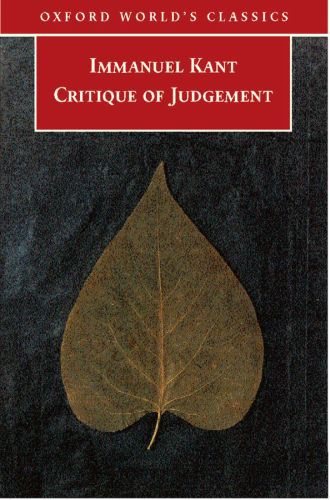 Kant's Critique of Judgement analyses our experience of the beautiful and the sublime in relation to nature, morality, and theology. Meredith's classic translation is here lightly revised and supplemented with a bilingual glossary. The edition also includes the important First Introduction. - ;'beauty has purport and significance only for human beings, for beings at once animal and rational'

In the Critique of Judgement (1790) Kant offers a penetrating analysis of our experience of the beautiful and the sublime, discussing the objectivity of taste, aesthetic disinterestedness, the relation of art and nature, the role of imagination, genius and originality, the limits of representation and the connection between morality and the aesthetic. He also investigates the validity of our judgements concerning the apparent purposiveness of nature with respect to the highest
interests of reason and enlightenment.

The work profoundly influenced the artists and writers of the classical and romantic period and the philosophy of Hegel and Schelling. It has remained a central point of reference from Schopenhauer and Nietzsche through to phenomenology, hermeneutics, the Frankfurt School, analytical aesthetics and contemporary critical theory.

J. C. Meredith's classic translation has been revised in accordance with standard modern renderings and provided with a bilingual glossary. This edition also includes the important 'First Introduction' that Kant originally composed for the work. -