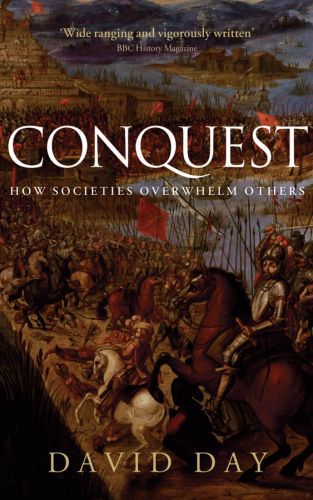 Conquest: How Societies Overwhelm Others

The history of the world has been the history of peoples on the move, as they occupy new lands and establish their claims over them. Almost invariably, this has meant the violent dispossession of the previous inhabitants.
Whether it is the Normans in England, the Chinese in Tibet, the Germans in Poland, the Indonesians in West Papua, or the British and Americans in North America, the claiming of other people's lands and the supplanting of one people by another has shaped the history of societies from the ancient past to the present day.

David Day tells the story of how this happened - the ways in which invaders have triumphed and justified conquest which, as he shows is a bloody and often prolonged process that can last centuries. And while each individual conquest is ultimately unique, nevertheless they often share a number of qualities, from the re-naming of the conquered land and the invention of myth to justify what has taken place, to the exploitation of the conquered resources and people, and even to the outright
slaughter of the original inhabitants.

Above all, as Day shows in this hugely bold and ambitious book, conquest can have deep and long-lasting consequences - for the conquered, the conquerors, and for the wider course of world history.