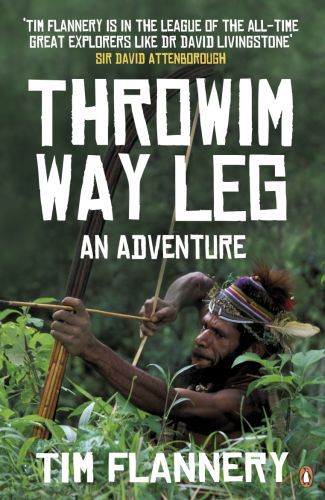 Throwim Way Leg is a book of wonder and excitement, struggle and sadness, a love letter to Papua New Guinea and Irian Jaya. 'In New Guinea Pidgin,' Tim Flannery explains, 'throwim way leg means to go on a journey. It describes the action of thrusting out your leg to take the first step of what can be a long march...' Here he invites us to share in his breathtaking adventures, as he meets skilled hunters and befriends a shaman, climbs mountains never before scaled by Europeans, discovers new species and, deep in the jungle, stumbles across the giant bones of extinct marsupials. He also writes movingly about the fate of indigenous people when their intricate cultures collide with mining companies and the high-tech modern world.'This book combines an irresistible author with an irresistible subject: Tim Flannery, a great zoologist and writer about science, relating his explorations of New Guinea, a vivid tropical universe' Jared Diamond'An enthralling introduction to the mountain people of New Guinea - unimaginably remote, charming, cunning, cruel, subtle and appealing - and to their magnificent land' New York Times Book ReviewTim Flannery is an internationally acclaimed writer, scientist and explorer. As a field zoologist he has discovered and named more than thirty new species of mammals, including two tree-kangaroos. His books include Country and the award-winning international bestsellers The Future Eaters, The Eternal Frontier and The Weather Makers. He has also edited and introduced many historical works, including The Birth of Sydney, The Diaries of William Buckley and The Explorers.