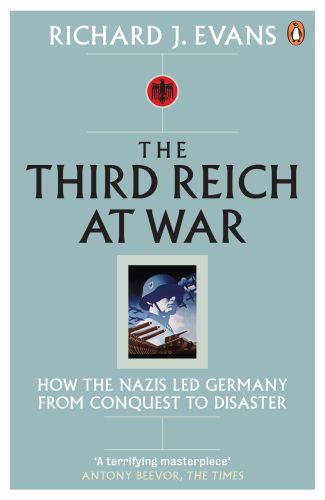 The Third Reich at War

The final book in his acclaimed trilogy on the rise and fall of Nazi Germany, Richard J. Evans's The Third Reich at War: How the Nazis Led Germany from Conquest to Disaster shows how Germany rushed headlong into destroying itself, shattering an entire continent. In 1939 Hitler mobilized Germany into all-out war. Richard Evans's astonishing, acclaimed history conjures up a whole society plunged into conflict - from generals and front-line soldiers to Hitler Youth activists and middle-class housewives - tracing events from the invasion of Poland and the Battle of Stalingrad to Hitler's plans for genocide and his eventual suicide. 'Masterly ... will surely be the standard history for many years to come ... This is a warning for the future, as much as a judgement on the past' ;Richard Overy, Daily Telegraph 'We all know how the story ends ... but Richard Evans brings it masterfully home ... magnificent';Peter Preston, Observer 'A chilling, brilliant read' Dominic Sandbrook, Sunday Telegraph Books of the Year 'It is hard to do justice to the humanity and scholarly range of The Third Reich at War ... triumphant ... a masterful historical narrative and the most comprehensive account of Nazi Germany' Nicholas Stargardt, The Times Literary Supplement 'It gives the reader persuasive answers to questions asked for so long, that will continue to be asked, about this most violent and inexplicable of regimes' Mark Mazower, Guardian Sir Richard J. Evans is Professor of Modern History at Cambridge University. His previous books include In Defence of History, Telling Lies about Hitler and the companions to this title, The Coming of the Third Reich and The Third Reich in Power.